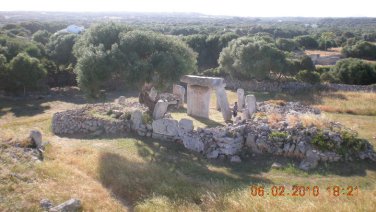 The Pomada is the signature drink of Menorca.  On the surface, it’s just gin and lemon soda splashed on ice.  But, if you dig a little deeper, it’s a perfect symbol for the island itself. The gin used in the cocktail is from an 18th Century recipe and concocted with a curious addition: wine alcohol.  After the beautifully balanced liquor is poured over rocks, the bubbly, tart tang of lemon Fanta is splashed on top.  Because this glass-bottled version of the brand is not offered in the US, it makes for a new and exotic experience for the taste buds. This drink has been incorporated into the island’s traditions for more than two hundred years.  A sea of yellow bottles can be seen during the Sant Joan festival in Ciutadella where the horses run in the city streets, galloping through the excited, terrified, and electric crowds.  A drink can be just a drink, but if you look a little closer and ask questions, it can be a representation of the past and the present–intoxicating, refreshing, alluring, alive.

My first study abroad experience unfolded off the coast of Spain on the island of Menorca.  The purpose of the program was to learn about the archaeology, cultural heritage management, and aspects of tourism on the island.  For those of you thinking, “Wait, I thought it was Mayorca?!”, you are close: Menorca is one of four major Balearic Islands.  Mallorca (pronounced “Mah-york-a”) is the largest island with the capital of Palma, Menorca is the medium-sized island where I studied, Ibiza is the small party island, and the smallest island is Formentera.  Menorca is unique amongst the islands because of its Biosphere Reserve designation from the United Nations.  This title provides unique challenges and opportunities for tourism, preservation, and economic development.

Taking a step back, biosphere reserves are large demonstration areas where development and sustainability are studied through human/nature interaction.  The Serengeti-Ngorongoro in Tanzania, Mount Olympus in Greece, the Maya areas of Guatemala, Mexico, and Belize, and Yellowstone National Park in the US are some better-known reserves.  Menorca is set apart by its stunning example of the ideal Mediterranean island ecosystem with gullies, caves, wetland, dunes, coast, and thousands of species endemic to the island.  Areas such as the Specially Protected Bird Area, Marine Reserve, Natural Park, and the archaeological sites of the Talayotic Culture accent the reserve. The vast majority of the Mediterranean islands do not have all these preserved areas and ruins.  This makes Menorca an exponentially more enjoyable destination than the alternatives as it affords the chance to journey through the past.

Throughout the island, businesses and organizations work together to improve the quality of travel, insure the professionalism of this sector, and optimize the image of Menorca so that it stands out as a desired destination from the competition.  Everyone I met on the island was friendly and hospitable to our entire group.  And now, whenever I speak about Menorca, it’s always positive simply due to its wonderful inhabitants.

Promoting tourism to the island is a win-win situation.  As the main industry on the island, tourism also serves as a multiplier to support other industries including farming, handicrafts, and dairy farming.  Hotels, hostels, public transportation, restaurants, bars, and small business owners are examples of just a few entities that coordinate with these overarching goals.  Many of these businesses are able to thrive only because of tourism.  From exploring the port cities and shops to traversing through Tayalotic sites, tourists are able to participate in numerous activities, especially exploring and enjoying the natural environment around the island.

The entire island is regularly cleaned and maintained in accordance with the local government, the Consell Insular.  You can immerse yourself in the natural environment by cycling, sailing, scuba diving, horseback riding, and even taking a ride in one of several glass-bottom boats (I highly recommend this one!)  From the glass-bottom boat, you can see not only the myriad of sea life that live only on or around Menorca, but also the geologic fault line that plunges into the water and splits the island in two. The fault makes for a perfect, natural harbor so you’ll always see huge cruise liners come right up to the sidewalk as they pass through to other exotic locations throughout the Mediterranean.  It’s incredible!  And in the same way as the harbor is important today, it also held a great deal of significance in the cultural exchange, communication, and development throughout Menorca’s history.

The first settlements on the islands were from the Neolithic Talayotic culture.  Several millennia ago, these people inhabited the islands and built everything out of the plentiful limestone found on the island.  Many of the impressive stone structures were found at our excavation site of Torre d’en Galmés.  The most interesting part about our site was that these stone structures, which were built thousands of years ago, were re-occupied by Muslim settlers beginning in the 10th century.  In one of the houses, there are artifacts from both cultures, one layered right on top of the other.  The history of cultures overlapping and co-existing continues today on the island as many ethnicities live together with a constant injection of tourists.

Farmers markets, city tours, handicrafts, and festivals are all actively promoted to draw visitors to the island.  Because the tourism product as a whole is becoming increasingly enticing, the local government has approved many new regulations so that the island doesn’t become over-run.  For example, one of the restrictions is a two-story limit for hotels.  This effectively freezes the cityscape on the island in its current form so that all people can enjoy the traditional aesthetics for years to come.

Although this sounds like the island would become stagnant due to the ever-expanding regulations, there is always a new breath of culture arriving in the harbor.  Like me, an American undergrad coming to study the ancient culture—I was part of the melting pot of ideas in my own little way.  I observed and experienced the nature, people, and sites so that I could tell others how wonderful it is—like I’m telling you right now.  Everyone travelling abroad to a new place can share stories and experience cultural events with others, but it makes it so much more meaningful when these things are in the context of the destination.  I believe that true appreciation of another culture comes from understanding its history.  So, when you go abroad, try to dig a little deeper and find out more about why things are the way they are at your destination.  I promise it’ll make for a much deeper experience.  And who knows, maybe it’ll start with a Pomada?